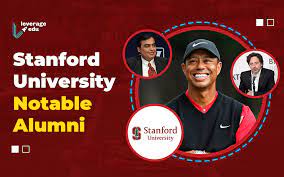 Stanford University is one of the top schools in the United States. In this article, we will be highlighting some Stanford university notable alumni. The University has produced some outstanding individuals who will be discussed extensively below.

Stanford University, founded in 1885 by California Senator Leland Stanford and his wife, Jane, has grown to become a renowned research institution and a haven for some of the country’s brightest minds. Stanford is currently ranked the sixth-best college in the country by U.S. News and World Report.

Stanford University is located 35 miles south of San Francisco and 20 miles north of San Jose in the heart of Northern California’s dynamic Silicon Valley, which is home to Yahoo, Google, Hewlett-Packard, and many other cutting-edge tech companies founded and led by Stanford alumni.

It is thus understandable when the University was dubbed the “billionaire factory.” It has been speculated that if Stanford graduates formed their own country, it would have one of the world’s top ten economies.

Stanford has one of the largest university campuses in the United States with over 8,180 acres of land and housing, 18 interdisciplinary research institutes, and seven schools.

Stanford University was founded in 1885 by California senator Leland Stanford and his wife, Jane, with the goal of “promoting the public welfare by exerting influence on behalf of humanity and civilization.” The couple’s only child had died of typhoid, and the decision to build a university on their farm was meant to be a memorial to him.

The University was non-sectarian, coeducational, and affordable from the beginning, teaching both traditional liberal arts and the technology and engineering that were shaping the new America at the time.

After more than a century, Stanford has produced 19 Nobel laureates and is consistently ranked among the top three universities in the world.

With nearly all undergraduate and 60% of graduate students living on campus, it’s no surprise that student life is vibrant and diverse, with over 625 organized student groups.

Stanford also has a long history of fostering creativity and the arts, with a thriving campus arts district and two world-class museums hosting regular exhibitions. Healthy, sustainable meals are served to the campus community through eight dining halls, a teaching kitchen, and organic gardens. The close-knit communal nature of campus life has even given rise to “Stanford speak,” a unique language spoken only on campus.

Stanford University is located 35 miles south of San Francisco and 20 miles north of San Jose in the heart of Northern California’s dynamic “Silicon Valley,” which is home to Yahoo!, Google, Hewlett-Packard, and many other cutting-edge companies founded and led by Stanford alumni and faculty.

The Santa Cruz Mountains and the Pacific Ocean are to the west of the University’s 8,180-acre campus, and San Francisco Bay is to the east. The Peninsula is known for its natural beauty, culture, and entertainment.

Despite the fact that the University is practically a community unto itself, with its own zip code—94305—it is located in the city of Palo Alto. Downtown Palo Alto is a short walk from campus and has a variety of attractions as well as shops and restaurants.

Below are the top Stanford university notable alumni:

Tiger Woods is the first on the list of Stanford University notable alumni. He is regarded as one of the most successful golfers of all time, and he is currently the world’s No. 1 golfer. He turned pro at the age of 21 and won his first tournament the following year. Soon after, he dominated world golf, rising to the top of the world rankings. Tiger won a Stanford record-tying 11 tournaments in just two years, including an incredible 8 wins in 13 starts in 1996. He won the NCAA individual championship in 1996 and was named Jack Nicklaus National Player of the Year.

Mukesh Ambani, an Indian business tycoon and the chairman of ‘Reliance Industries Limited,’ is one of the world’s wealthiest people. His brilliance and success are measured by the fact that his company is currently India’s most valuable in terms of market value.

Ambani enrolled at Stanford for an MBA but dropped out in 1980 to help his father build Reliance, which was still a small but rapidly growing company at the time. His father believed that real-life skills were gained through experiences rather than sitting in a classroom, so he summoned Mukesh from Stanford to take command of a yarn manufacturing project in his company. He is a well-known Stanford University notable alumnus.

Sundar Pichai is the current CEO of Google Inc. and a computer engineer. Google, which focuses on Internet-related services and products, underwent corporate restructuring in 2015, after which Alphabet Inc was established as its parent company, with co-founders Larry Page serving as CEO and Sergey Brin as President.

Pichai has been serving as Google’s head of Products and Engineering and has been named the new CEO of Alphabet Inc’s largest company, Google. Pichai began his career at Google in 2004 as a product manager. He oversaw the innovative efforts for several Google products, including Google Chrome and Chrome O.S., both of which became extremely successful.

Reese Witherspoon is an American actress who has won academy awards and produced films. Witherspoon began her career as a teen actor, juggling a variety of roles. She attended Stanford University as an English literature major but dropped out before completing her studies to pursue a career as an actress.

Witherspoon is one of the few actresses who has managed to strike a balance between commercial success and critical acclaim. Witherspoon has also been a global advocate for children’s and women’s rights, and she is an active supporter of the Children’s Defense Fund.

Larry Page is an American entrepreneur and scientist who co-founded Google Inc., a computer software behemoth that offers a wide range of internet products and services. Google began as a web search company and gradually expanded into other internet-related fields.

Page received his bachelor’s degree in applied science from Stanford. Page’s fascination with computers began at a young age because he was the son of computer professionals. He was always fascinated by technology, business, and innovation as a child.

Peter Andreas Thiel is a businessman and author from the United States. He co-founded PayPal and served as its CEO until eBay purchased the company.

He then founded ‘Clarium Capital,’ as well as co-founded startups such as the private American software company ‘Palantir Technologies,’ a working capital firm called ‘Founders Fund,’ and a working capital fund called ‘Valar Ventures.’ He is a conservative-libertarian who co-founded the student-run newspaper “The Stanford Review” and has donated to numerous politicians. He is also the founder and chairman of the ‘Thiel Foundation.’

Sally Ride was an American physicist and astronaut who became famous for being the first American woman to visit space. Ride spent several years accumulating degrees and knowledge in order to be selected for NASA’s program. She completed rigorous training and joined NASA for what would turn out to be a historic mission. Ride was chosen to travel in an exceeding space flight over the course of four years, which she eagerly accepted. During her later years, she was heavily involved in charity work, the majority of which was devoted to ladies and young women.

Jennifer Lynn Connelly is an American actress who rose to prominence at a young age. She was asked to perform a ballet routine for her debut in Hollywood films. She was gradually making a name for herself in the industry, but all the eyes and intimidating add the flicks overwhelmed her, and she or he decided to take a chance and study drama at University. She had her breakthrough role in the film ‘Requiem for a Dream,’ and there was no looking back for her after that, with lead roles in films such as ‘A Beautiful Mind,’ ‘Blood Diamond,’ and so on.

Brown, a native of Missouri, attended Mary Institute and St. Louis Country Day School before enrolling at Stanford University, where he earned his acting degree in 1998. Brown began his career on stage, appearing in a number of regional theater productions. In the 2002 romance drama ‘Brown Sugar,’ he made his film debut. Brown won a Primetime Emmy for Outstanding Supporting Actor in a Limited Series for his work on ‘American Crime Story.’

Stanford Online offers a variety of professional and graduate certificate programs, as well as numerous free courses in subjects such as health, education, engineering, arts, and humanities, in addition to its online master’s degree programs.

Stanford University is one of the most prestigious universities in the United States. That being said, in order to get a good education, you must choose the right major. The following are the top ten majors at Stanford University.

American studies are a newer course that you can take. You will learn about the history of this country as well as the people who built it. If you are interested in history, this is a good major to pursue.

Economics is a very broad major. If you major in economics, you will have a plethora of career options. You will also become more fiscally responsible as a result of this.

Finance is a degree that is also widely universal. With a major in finance, you will learn how to manage money for yourself as well as for others. With your education, you will even be able to assist your friends and family. Some Dollar signs made of metal

If you enjoy working with children, you should major in early education. This degree focuses on grades K through 4. You’ll even be able to work with children while still in school.

You can major in film and media studies, which is a lot of fun. You will watch movies and examine media while learning a lot and having fun. This will also help you learn more about the industry. People who are making a film

Major in international relations if you want to improve your communication skills. This enables you to communicate effectively with people from different cultures.

In this country, more and more people are beginning to major in Spanish. A background in Spanish will help you land a valuable job in the future. If you are bilingual, you can earn even more money. The Flag of Spain

If you have a passion for music, you should make it a career. This is something you could do if you majored in music. You have a lot of fun composing and listening to music while getting an education. Some vibrant musical notes

In Which U.S. State Would You Find Stanford University?

What Is Stanford Known For?

Stanford is one of the world’s most research-intensive universities. More than 68 Stanford faculty, staff, and alumni have won the Nobel Prize since 1952, and Stanford has the most Turing award, winners.

Stanford offers over 65 majors ranging from Aeronautics and Astronautics to Urban Studies. Stanford University’s most well-known undergraduate school is the School of Engineering, which is ranked second in the United States News Best Undergraduate Engineering Programs.

When we think of the best and most prestigious colleges in the world, Stanford University is always at the top of the list.

For many students, it is a dream college. This college has provided a platform for many students who were determined and hardworking to achieve the highest levels of success in their careers through their zeal and confidence.

We hope this post answers certain questions for you about some Stanford university notable alumni.